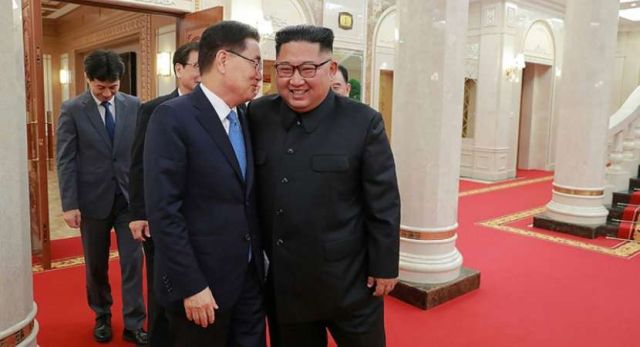 South Korea’s National Security Office Director Chung Eui-yong, who led the special delegation to Pyongyang on Wednesday, told this to the media here on Thursday.

Kim and Moon have agreed to hold the new summit to continue strengthening ties and work on the denuclearization of the peninsula, as stipulated in their joint declaration signed in the first inter-Korean summit in April.

They also discussed the complex process of dialogue between Pyongyang and Washington, Efe news reported.

During the meeting, Kim “reaffirmed his firm commitment to complete denuclearization of the Korean Peninsula, and expressed his willingness to closely cooperate with not only South Korea but also the US to that end,” Chung said.

Chung also said that Kim has asked him to deliver a message to US President Donald Trump. However, he did not specify its content.

After Trump and Kim signed a joint declaration in Singapore in June to work towards the denuclearization, in exchange for Washington guaranteeing Pyongyang’s security, the White House has grown impatient over the absence of concrete measures from the regime.

Pyongyang, for its part, demands progress in the signing of a peace treaty to definitively end the inter-Korean conflict in exchange for concrete steps to dismantle its nuclear arsenal.

Koreas to hold summit in Pyongyang in September