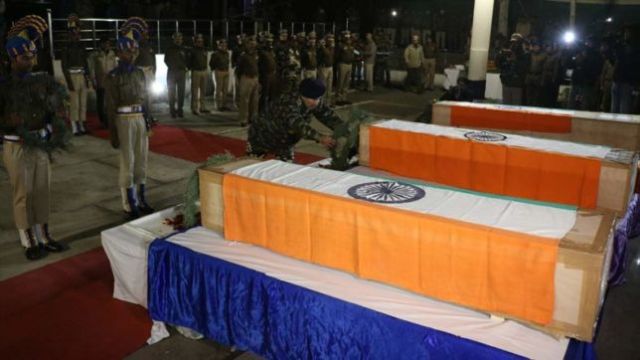 Two martyrs, two ideologies, two funerals and two mourning families. Kashmir’s saga of tragedy and destruction could not have a more poignant symbolism as these funerals took place when the world was welcoming another New Year.

Hundreds attended the funeral of Fardeen Ahmad Khandey, the 16-year-old boy who celebrated his impending “martyrdom” through a spine-chilling video in which he said: “Jihad, the holy war, had to be carried on as the doors of freedom can only be opened with the blood-soaked hands of martyrs.”

This is the first time after over a decade in the bloody 30-year-long history of separatist violence in Kashmir that local boys carried out a “Fidayeen” (suicide) attack with one of them celebrating the perceived martyrdom with absolute motivation.

As hundreds attended the funerals of two “martyrs”, Fardeen and Manzoor Baba, another “martyr” of a different cause was buried in Badgam district’s Nagam village.

Sharif-ud-Din Ganai had joined the Central Reserve Police Force (CRPF) eight years back. He was killed when security forces were fighting to flush out Fardeen and Baba at the training centre in Pulwama district’s Lethpora town.

Ganai was buried as his parents, brothers and relatives mourned the death of their sole breadwinner who had joined the security forces for a better tomorrow.

It was a paradox that nobody has been able to resolve for nearly three decades in Kashmir — the paradox of one martyr killing another and both believing that they have a place in Heaven that must be earned — one, by shedding blood of innocents and the other for defending them. But both bring inconsolable tears to their families.

These martyrs to different causes and ideologies died when the world was celebrating the beginning of 2018 and praying for peace, prosperity and hope.

Security forces say over 200 militants were killed in Kashmir and nearly half-a-dozen others came back to their families after joining militant ranks during 2017.

Suicide attacks have occurred in Kashmir in the past as well, but these had mostly been carried out by foreign militants. Local boys joining “suicide squads” of militant outfits has definitely dampened hopes that normalcy was around the corner in the beleaguered state.

“What is more disturbing is the fact that young boys motivated to such extreme levels do not necessarily belong to poor or under-privileged families. Fardeen was the son of a serving cop and the family is relatively better off,” said an intelligence officer requesting not to be named.

One man’s martyr is another man’s traitor. This maxim may hold good for the unenviable situation the people of Kashmir are facing and yet this provides little consolation to families being destroyed.

Local boys are celebrating so-called martyrdom when they should have been celebrating careers and professions. In whatever little or large numbers such “celebrating martyrs” might exist here, unless the last of them is convinced that life is a greater celebration than death, hopes of a peaceful future would continue to elude, underlined by the coffins reaching the families and disrupting their lives.