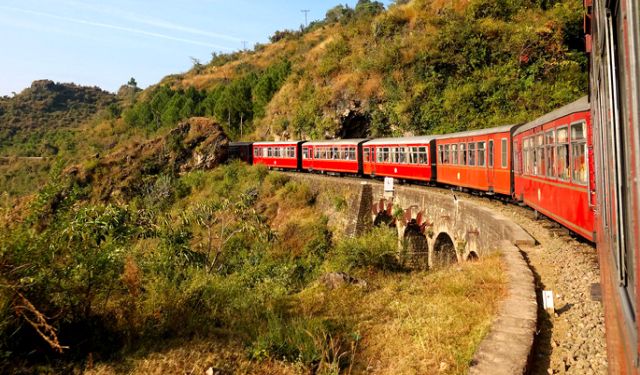 Agartala : Indian Railways, besides incurring additional costs, has had to confront unique challenges in laying tracks in the mountainous northeastern region due to its topography, soil and natural challenges, a top official has said.

According to Commissioner of Railway Safety (CRS-NE Circle) Shailesh Kumar Pathak, the landscape, soil conditions and other natural challenges forced the railways to spend much more money and to confront diverse challenges in the northeastern region, comprising eight hilly states.

“Compared to the northeastern region, the spending and the challenges are much less in the mainland states,” Pathak told IANS after examining newly-laid railway tracks in Tripura.

The Northeast Frontier Railway (NFR), one among the 17 railway zones in India, is responsible for extending the railway lines and maintaining train services in seven districts of West Bengal and five districts in north Bihar, besides the eight northeastern states, including Sikkim.

Pathak, a senior engineer of the Civil Aviation Ministry, said: “The NFR gets to work at optimum pace for only four to five months a year as the region records intense rain from March to end-October with the actual monsoon running from June to September. In the other states of India, the good working season is for at least eight months.”

“The northeastern states and large parts of the Himalayan region are siltation- and landslide-prone areas. The Railways has to take extra precautions to deal with the natural adversities. A lesser working period makes the job tougher for railway engineers and others,” he added.

“Land acquisition, forest clearances, syndicate trouble and finding skilled workers are the other impediments in the northeastern and eastern region,” Pathak said.

He said that the NFR has been trying hard to extend the railway lines in three remaining capital cities of northeast India, excluding Meghalaya’s Shillong and Sikkim’s Gangtok, by 2020.

“Due to land-related problems, the expansion of rail network in Meghalaya and Sikkim has turned into a non-starter. Work is on to extend the railway network in Manipur, Mizoram and Nagaland,” the official explained.

The NFR is also laying new railway tracks at three places along India-Bangladesh border in Tripura and that would facilitate the carriage of passengers and goods from the northeastern states on the Bangladeshi railway network.

With southern Tripura’s Sabroom just 75 km from the Chittagong seaport in southern Bangladesh, the projects, together worth Rs 1,150 crore, are to be completed by March 2019.

The Indian and Bangladeshi railways are laying 15 km of tracks at a cost of Rs 963 crore between Agartala and Akhaura in Bangladesh to link the networks of the two neighbours.

The NFR has already laid a 75-km rail line up to southern Tripura’s Belonia aiming to link the Bangladeshi network on the other side of the border in Feni district.

Work is also on to lay a 39-km line from Sabroom to the border.

The NFR’s Chief Administrative Officer, A.K. Yadav, said that due to the large number of rivulets and small rivers, many small, medium and big bridges, besides many tunnels, have to be built in the northeastern region.

“India’s longest 11.55 km rail tunnel is now under construction as part of the 111-km Jiribam-Tupul-Imphal line that ends in the Manipur capital. This is longer than the the 11.2 km Pir Panjal tunnel on the Banihal-Qazigund line in Jammu and Kashmir,” Yadav told IANS.

(Sujit Chakraborty can be contacted at sujit.c@ians.in)

‘Northeast not homogenous but diverse grouping of communities’