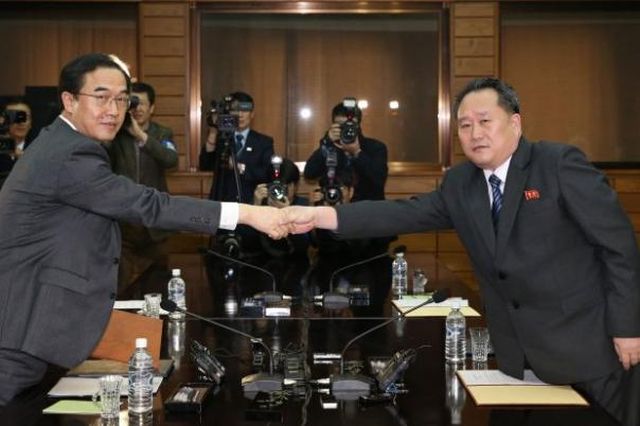 Seoul : Officials from South and North Korea on Monday began a new working-level meeting to finalise the protocol and security measures regarding the historic summit between its leaders scheduled to take place on Friday.

The meeting is being held in the Tongilgak Pavilion, on the northern side of the militarised inter-Korean border, according to the South Korean presidential office.

It is the third such meeting between the representatives of the two countries, since the inter-Korean summit was announced in early March, reports Efe news.

The officials are expected to discuss details of the Friday summit such as the exact time of the meeting between Kim Jong-un and Moon Jae-in.

Also on the agenda is how Kim will access the summit venue – Peace House – the pavilion on the southern side of the border, a detail of historic importance given that it will technically be the first time a North Korean supreme leader will enter the South.

Monday’s working-level meeting comes after Pyongyang announced over the weekend that it would stop conducting nuclear tests and intercontinental missile launches, marking a significant step ahead of the Kim-Moon summit set to focus on North Korea’s possible denuclearization.

The summit will be the first among Korean leaders in 11 years and the third in history, after the ones held between the late leader and Kim’s father, Kim Jong-il, and the South Korean presidents Kim Dae-jung and Roh Moo-hyun in 2000 and 2007, respectively.

Another meeting is planned in May between Kim and the US President Donald Trump, which would be the first ever meeting between the sitting heads of the two countries.

Summit in Tehran calls for political solution in Syria