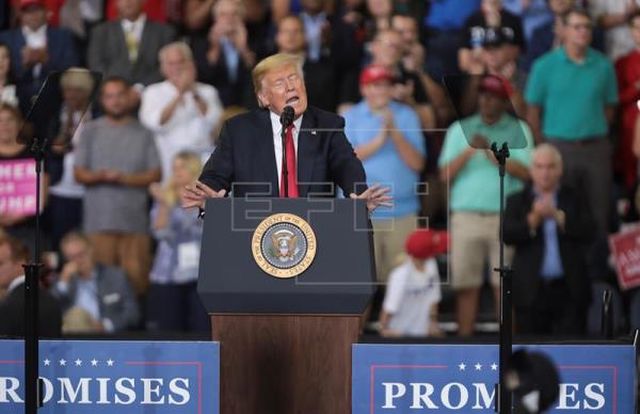 Washington : US President Donald Trump warned the Department of Justice and the FBI that he will intervene if they failed to do their jobs.

The President on Thursday lashed out at the agencies and the media during a rally in Evansville, Indiana, aimed at improving Republican prospects in the November legislative elections, in which his party is vying for control of Congress, Efe reported.

“What’s happening is a disgrace and at some point – I wanted to stay out – but at some point, if it doesn’t straighten out properly because I want them to do their job, I will get involved and I’ll get in there, if I have to. Disgraceful,” he added.

Trump gave no more details about the nature of the intervention in the Department of Justice and the FBI, which have historically operated independently of the White House’s political clout and with the understanding that presidents cannot supervise or influence their investigations.

The relationship between Trump and the US Attorney General, Jeff Sessions, has turned into a feud and last week saw speculation that Trump might fire him, possibly after the November elections.

Trump has spent more than a year airing his frustration over Sessions deciding to distance himself from the investigation into alleged Russian interference in the last presidential election because of Sessions’ own contacts with Moscow.

When speaking about his possible intervention in the Justice Department, Trump seemed to have in mind the other issue that irks him regarding Sessions’ department: his alleged reluctance to investigate and punish Trump’s political enemies.

“Look at what she’s (Hillary Clinton) getting away with – but let’s see if she gets away with it. Let’s see,” said Trump amid chants of “Lock her up!” from his followers.