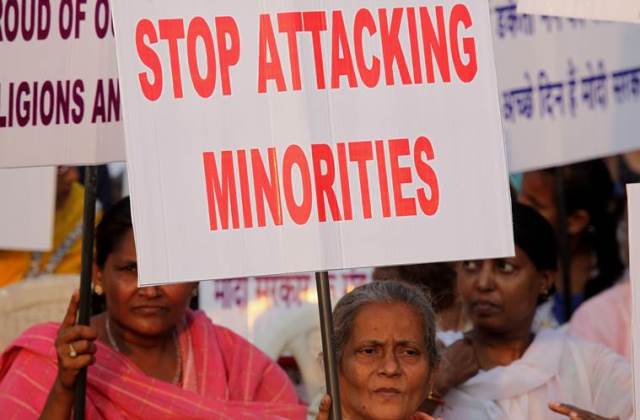 We are living in times where the social norms, the values of Constitution have been violated times and over again. The increasing atrocities on dalits, the lynchings of minorities in the name of Cow-Beef have changed the social equations in a drastic way during last few years. This in a way is part of the ascendance of a politics of communalism which believes in narrow, sectarian religious identity as its defining point. This may get further worsened with the big mandate for Modi in 2019 elections. In the aftermath of elections leading to his return to power, Modi in his victory speech made certain observations which are very disturbing on one hand and also give an idea of shape of things to come.

He stated that this election campaign has unmasked the deceitful claims of secularists and that said that now they can’t mislead the country. As per him secularism as a mask has been destroyed in these elections and that secularism was a cover for minority appeasement. He states that minorities have been deceived and cheated by the parties claiming to be secular.

This statement is not just in the euphoria of victory. For communalism it has been a deeper agenda to do away with the practice of secularism. It is true that there had been aberrations and weaknesses in the practice of this concept, with fallacies like the reversal of Shah Bano judgment or opening the gates of Babri mosque for Shilanyas. The assertion that minorities have been appeased is a total lie. The reports of Gopal Singh Commission, Rangnath Mishra Commission and Sachar Committee tell us about the worsening plight of the Muslim minorities. Some fundamentalist elements within Muslim community have been promoted but the Muslim community as a whole has on one hand been economically marginalized and on the other been subjected to social insecurity. Going beyond the obvious one need to understand as to why the shortfalls in the practice of secularism have dogged our nation?

Secularism has been defined and interpreted a various ways. In Indian context ‘Sarva Dharma Sambhave’ has been the major interpretation. Also that state will not interfere in the maters of religion and religion (clergy) will not dictate and state policy has been the major understanding of this concept, secularism, which is core and integral part of the concept of democracy. Some examples of this are in order. In the wake of demand for renovation of Somnath Temple, Gandhi said that Hindu community is capable of building its own temple. While his disciple Nehru did follow Gandhi’s path in times to come. Same Nehru later called the dams, industries and universities as temples of Modern India.

Gandhi in his own way puts it up brilliantly when he says, “Religion and state will be separate. I swear by my religion, I will die for it. But it is my personal affair. The state has nothing to with it. The state will look after your secular welfare…”

Social scientist Rajiv Bhargava points out that secularism “…combats not just discrimination and other worse forms of inter-religious domination such as exclusion, oppression and humiliation. It is equally opposed to intra-religious domination, i.e. the domination (of women, Dalits, dissenters) within every religious community”

Secularism did not have smooth march in India. It came up with the rising classes during colonial period. The classes which came up with the changes like industrialization, communication and modern education. They called the process of comprehensive change as ‘India as a nation in the making’. The streams like those represented by Bhagat Singh, Ambedkar and Gandhi made it the foundation of their political ideology and struggle for better society. They stood for Indian nationalism. While the declining classes of Landlords and kings shaken by the changes in social fabric and loss of their earlier hegemony came up with communal politics. This communal politics in turn had a bifurcation, Muslim communalism and Hindu communalism. They dreamt of Muslim Nation and Hindu nation respectively. As Professor Bipan Chandra points out Communalism regards a community of one religion as a nation. In India it went through different phases of mild, moderate and extreme communalism. Its understanding is that people of one religion have similar interests, which in turn are different from those of other religion, and so the religious communities are made to pitch against each other. This politics regards the ‘other’ community as a threat to its’ own self. At the same time the intra societal hierarchies are put under the carpet, as the deeper agenda of these groups is to maintain those hierarchies of caste and gender.

One of the weaknesses of practice of secularism in India has been the tremendous opposition from communalism which has been on a rise. While in Pakistan, Muslim communalism was strong right from the beginning; in India it has become stronger during last four decades or so. Its strength has been founded on the polarization, which is an outcome of communal violence. Its issues are those of identity issues like Ram Temple, Love Jihad, Ghar wapsi and Holy cow-beef. It is this communalism which has stood as a counter to the secular ethos of the country; it is this which is the major obstacle for secularism being properly implemented. There are many factors which have been conducive to and helping in the promotion of divisive politics of communalism, one of them being the non completion of secularization process, the process whereby the power of landlord-clergy duo is abolished in a society marching towards democracy.

In India, due to colonial rule, the national movement had to direct its energy primarily against the colonial rulers, while the landlords-kings, to be later joined by some elite-middle classes, continued on the margins, giving the life breath to communalism, leading to partition of the country among other negative phenomenon in the society. Surely India’s plurality and diversity, though currently under cloud, will not let the secular values being eclipsed by the sectarian politics, which is currently on the prowl.